Software is also called computer program. The software that we use daily in our mobile and computer such that – Internet Explorer, Ms-word, excel, paint, Photoshop, and Operating system (Windows, Mac, Android, Linux) as a result our works become so easy.

But friends, all these software are nothing without any hardware. You will need hardware to run these. If you want to type on ms word then you will need keyboard. If you want to edit photos on Photoshop then you will need a mouse. Similarly, there is a lot of hardware in the computer, with the help of which the software is run, I have given some examples of hardware, about which we will know in further detail. Examples of Hardware – Keyboard, Mouse, Hard Disk, Monitor, Motherboard, CPU, UPS, Speaker, all these are hardware. 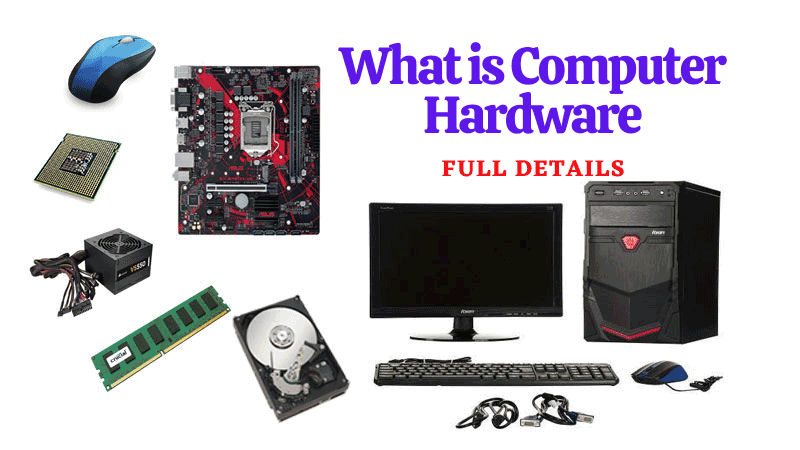 What is Computer Hardware?

External hardware, also called peripheral components, are connected to the computer from the outside. These include input and output devices.

By the way, mouse means rat, this device is called mouse because it looks like a rat. It is also known as pointing device and cursor moving device. This is also an input device and it is also connected with the help of USB port. A normal mouse has 3 buttons Left key, Right key, Middle key Roller. But if you use a gaming mouse then it can have 6 or 7 buttons. The mouse is operated by placing it on a flat surface or mouse pad. It is used to control the pointer or cursor.

It is an electronic device which is used to show the output of the computer. In watching it Looks like T.V. In desktop this hardware is bigger in size but in laptop it’s size is smaller. There are two types of this monitor.

This monitor is also like a TV to see. It is bigger in size and occupies more space. And in them electricity is also used more. This is the oldest used technology, nowadays this technology is rarely used.

The full form of LCD is Liquid Crystal Display. This monitor is a kind of flat panel display. This technology is very new compared to CRT monitors. This monitor occupies less space and weight less, the LCD display also consumes very little electricity. In today’s time you will see this display in use everywhere. LCD displays are used in mobile phones, tablets, and computers.

This is the external hardware of a computer, its uses for hard copy i.e. whatever is written on any paper or in the form of a photo, it can be scanned with the help of this hardware and stored in hard drive in soft copy. It is also called external device. This soft copy can be easily sent from one place to another with the help of internet.

This is also External Hardware, using this we can hear sound, it gives output in the form of sound, nowadays it remains inbuilt in the system.

Printer is an output device. It works unlike hardware scanner, it is used to print soft copy  into hard copy. But now the use of scanner has reduced because along with the printer the scanner has also been added, now both the work can be done with the help of printer.

The full-form of RAM is Random-access memory. In other words it is a type of memory. It acts as a memory in your computer or mobile. In a way there is primary memory. It is known by many other names. Like – Main memory, Physical memory, Volatile memory. It temporarily stores the work done in computer or mobile. Unless you save those files in hard disk or pen drive.

The full form of GPU is “Graphics Processing Unit“. The picture and movie created by the computer is called graphic. The work that the CPU used to do earlier, is now also done by the GPU. GPU is a co-processor, which does graphical calculations. In today’s time, applications, software and games come in such high graphics.

Its other name is audio output device, sound board, or audio card, sound card. It helps to make sound. Which we can hear through speakers and headphones.

The full form of HDD is Hard Disk Drive. HDD is a data storage hardware device, it is a type of memory. This is called non volatile memory. Hard disk is used to store files or data, it is an important part of the computer. You can keep the data permanently stored inside the hard disk.

DVD Drive is installed in every Desktop and Laptop, which are also called Optical Drive. And DVD drive is also known by other names, Disc drive, Odd, CD Drive, DVD Drive. They are used to store digital data. And DVD, the data stored in CD is used to watch or store it in the computer.

The full form of SMPS hardware is Switch Mode Power Supply. It is the main part of the computer which works to provide power supply to all the different components in the computer. It is in square shape to see. There are many wires in it which we put in all the components of the computer. Like – Motherboard, DVD Writer, HDD, Fan, etc.

ROM is a non volatile memory so this means that it is a memory device or storage medium which stores information permanently. The full form of ROM is “Read Only Memory”. This hardware is installed inside the motherboard itself, in which the BIOS programs are installed.

This hardware is connected to the motherboard. The heat sink fan is mounted on top of the CPU so that it can keep the hardware processor cool.

A network interface card (NIC) is a hardware component without which a computer cannot be connected to a network or internet. NIC is also known as an Ethernet card, network adapter, LAN adapter or broadband card. This network card allows your computer so that it can connect to the Internet using an Ethernet cable.

That cable is connected to a router or modem that connects your computer to the broadband. Almost all new computers have a network interface card, which is directly connected to the motherboard.

Questions and answers related to hardware.

Friends, I hope you got answer of the following questions that What is computer hardware? Difference between hardware and software? Types of computer hardware?  If something that you didn’t understood related to this post, So you can ask me in comment section. Also share this post to your friends that they too can known about hardware and software. Hope you liked this article, thank you.

What is RAM ? What is the use of RAM in computer ? 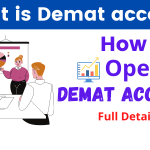 What is Demat account and how to open it ? 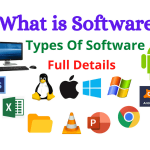 Friends, do you know what is Computer software? and different types of software? How to Create a Computer Software? almost everyone knows about software...

Hello friends, welcome back with another new article and this article will be very  helpful for you if you are a computer user. Guys...

ABOUT US
Hello friends, welcome to Technewinfo.com, on our website, you can get information related to computer, mobile, internet, new technology, invention and general knowledge in English language. The purpose of our website is to help you all.
Contact us: Contact@technewinfo.com
FOLLOW US
© Copyright © 2018 - 2023  Tech New Info. All rights reserved.