What is the GPU? How does the GPU work? What is the difference between CPU and GPU?

What is GPU and CPU?

A chip is inserted inside the CPU is also known as Processor. Which  controls all the Components of Processor Computer. Processor is an Electronic Device which is installed on the computer’s motherboard. Processor does all the work of Computer programming. 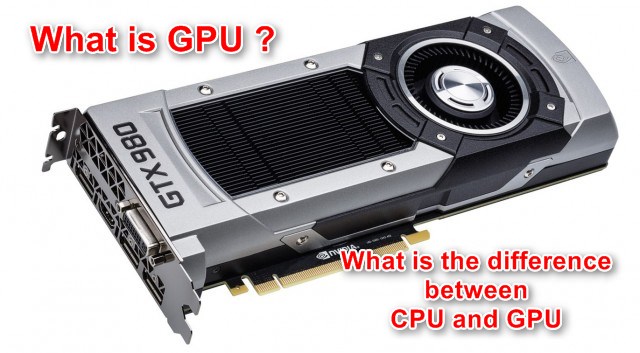 What is the GPU?

The GPU’s full form is “Graphics Processing Unit.” The picture and  movie created by computer are called graphic. The GPU also used to do the work that the CPU used earlier. The GPU is a co-processor, which does graphical calculation

The GPU’s work is rendering images. Which means that the Graphics Processing Unit on the computer screen shows images faster than the CPU. Because in this method of parallel processing has been used. And due to which the GPU can speed up a lot of graphical calculations at the same time. Thereby increasing the quality of image and video. In the same way if we talk about a mobile phone, then the processor runs applications or program in mobile. And the GPU handles all the animations, videos, images and games that are visible on the display. So you may have understood what the GPU works, can say in simple language. That Graphics Processing Unit image shows you the increase of video quality.

Graphics Processing Unit and Central Processing Unit are both a processor. But both of them have different functions, like computers and mobile have a processor, and if the graphic card is not there, then the professor processes all. If you talk about a computer processor. So all of the computers are able to do the process. Whether to run a calculator in the computer A professor can do all the work by running Word, Excel or Internet. But the graphic card works only on the visible image and video.

How many types of GPU are there?

Graphic card is used in two ways. The first graphic card is a part of your processor, which we know in the computer as the name of HD graphic. And mobile has midiatek, qualcomm processor or  Adreno GPU processor and also called integrated graphic.

If we talk, video rendering or image processing, CPU architecture is serial processing and GPU is parallel processing. And in both of these, there are lots of core examples, like the Intel i7 core processor, in which the core is like small blocks. The GPU has parallel core, which makes it work much faster than the image processing of the CPU, and we can see the very best quality of images in the computer.

So friends will find you all the information about GPU. If you have any questions related to GPU, then you can ask and comment.

Different Forms of Theme For Your Olympic Functions